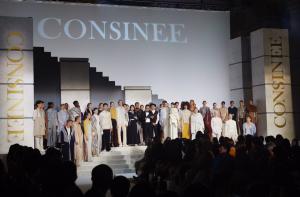 Boris Xue, Consinee Group’s chairman, delivering a speech at its grand fashion show at Cipriani Wall Street on the evening of July 17th, 2019

NEW YORK, NY, UNITED STATES, July 22, 2019 /EINPresswire.com/ — NEW YORK, July 17, 2019 — At the iconic Cipriani's banquet hall, 55 Wall Street, on the evening of July 17, CONSINEE GROUP, China's largest spinner and exporter of cashmere yarn, held its spectacular runway fashion show for the second year in a row. A large industry presence of over 400 fashion insiders attended, including representatives from myriad leading U.S. and Europe fashion brands, as well as many of the most influential textile and fashion industry leaders worldwide.

The show's 200-foot U-Shaped runway, set up beneath Cipriani's 70-feet dome, saw 88 ready-to-wear looks presented, each of which had been knitted from CONSINEE's premium cashmere yarn. The show’s production team—with over a decade’s experience of producing New York Fashion Week shows and some of the world’s most high-end fashion events–drew from extensive past collaborations with various global fashion brands and spent months on the venue’s overall elaborate design and four full days setting up the classical yet complicated marble background stage.

Taking place in the elegant Greek Revival Cipriani venue that once served a bustling historical commercial exchange, the CONSINEE annual fashion show was produced by recognized New York-based China Fashion Collective and served up a visual feast entitled "STITCHED IN TIME" for fashion industry leaders from all over the globe.

With constant color-changing lighting, and music that was, at turns, sometimes mysterious and classical, sometimes cheerful and lively, the nearly 100 looks of garments, designed by the award-winning knitwear designer Steven Oo with CONSINEE's fine yarn, were presented to various fashion brands’ representatives and fashion insiders to grant the attendees the opportunity truly to experience CONSINEE's most advanced manufacturing technique and the different styles from three different lines—CONSINEE, TOPLINE, and ICCI—as well as to help them intimately to understand CONSINEE's full-range of ready-to-wear and luxury cashmere yarn capabilities.

CONSINEE Group, founded in 1999, is located in the beautiful coastal city of Ningbo, China. Through nearly 20 years of continuous growth and innovation, CONSINEE Group is now the biggest exporter of cashmere yarn in China and in that country is the only large textile yarn manufacturer that uses a new imported automation assembly line. In 2017, CONSINEE Group, in cooperation with Siemens, became the only enterprise in the textile industry to build a fully intelligent digitization system served by unmanned aerial vehicles.

CONSINEE Group produces and sells nearly 10,000 tons of high-grade yarns and fabrics annually, including cashmere and other natural raw materials, of which 100% cashmere yarn exceeds 2,000 tons, accounting for 20% to 25% of the world's pure cashmere raw material production.

As China’s most prestigious cashmere yarn company, CONSINEE Group has been working with hundreds of leading global fashion brands for the past twenty years, including RALPH LAUREN, CALVIN KLEIN, BURBERRY, HUGO BOSS and MAX MARA. The top luxury brands CHANEL and Hermès also appear on the CONSINEE client list.

Entitled "STITCHED IN TIME," the 2019 runway show marked the second consecutive year that CONSINEE Group has come to New York with its most beautiful and elaborate designs. Boris Xue, CONSINEE Group’s chairman, proudly explained that every single stitch, every single line speaks for the brand image and reputation of CONSINEE.

"Even though the runway show only lasts for a few dozen minutes, we hope that hundreds of our industry friends from Europe and the United States can see that Chinese companies like CONSINEE devoted great efforts in pursuing excellence in every single stitch, every single line and every single product with decades of continuing hard work. The show ‘STITCHED IN TIME’ condenses all the efforts of every CONSINEE employee. And these efforts and our high-quality yarn are woven together, like a journey through time.” Said Xue. “I hope that our spirit of pursuing excellence and manufacturing high quality Chinese products will be as timeless and eternal as time."

“CONSINEE is proud to have been the very first textile company in China to introduce a recycled production line from Italy. Currently, CONSINEE sustains two raw material production lines imported from Italy that produce 400-500 tons of high-grade natural recycled yarns annually. ” said Sherry Xue, one of Consinee's project managers for this year’s grand fashion show. “CONSINEE is also the first enterprise to advocate conscientious caring for animals and protection-pasture plants, and it serves as vice president organization and one of the sponsors of ICCAW, the international cooperation committee for animal welfare.”

Boris Xue said that through such a large-scale presentation involving both the Chinese and American fashion industry leaders, he hoped to present CONSINEE’s devotion and determination in continually pursing excellence and to show industry friends and clients from all over the world that CONSINEE’s high-end cashmere yarn products are bringing a variety of possibilities to the global fashion industry for sustainable win-win cooperation.