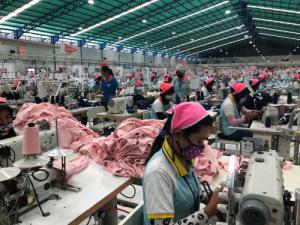 Minister of Trade Will Make Reducing Trade Deficit a Priority

Domestic industries must have instruments to protect them”
— Johnny Darmawan

JAKARTA, INDONESIA, November 3, 2019 /EINPresswire.com/ — As the newly inaugurated Minister of Trade, Agus Suparmanto settles down to work following his inauguration on Wednesday 23 October, a Focus Group of the Indonesian Chamber of Commerce (KADIN) has requested the Government to continue the policy of protection for local industry in the face of the China/US trade dispute and the alarming increase in imports. "Non-tariff barriers can be a mainstay as an effective instrument to protect domestic industries," said Kadin Deputy Chairperson for Industry, Johnny Darmawan in the Non-Tariff Measures Group Discussion Forum at Menara Kadin Indonesia (10/10/2019) as reported by Beritagar.id on 10th October 2019 https://beritagar.id/artikel/berita/digempur-barang-impor-industri-nasional-butuh-hambatan-non-tarif

MINISTER OF TRADE WILL MAKE REDUCING TRADE DEFICIT A PRIORITY

The recommendation of KADIN matches well with the statement of the incoming Minister of Trade, Agus Suparmanto that reducing the Trade Deficit is one of the tasks given to him by President Jokowi.

As reported in Merdeka.com on 23 October 2019, Agus said that he will have a more selective policy towards imports as one way to improve the trade balance deficit.

The Focus Group observed that the rapid flow of imported goods entering Indonesia has reduced the competitiveness of the domestic manufacturing industry. The problem has been exacerbated by the provision of subsidies (in various forms) from the governments of the exporting countries, document manipulation by exporters (misdeclaration), transfer of HS or tariff posts (circumvention) and undervaluation. "Domestic industries must have instruments to protect them because many other countries have entered the global free market and are protecting their domestic industries using two instruments such as tariffs and non-tariffs, specifically developed countries are more likely to develop Non-Tariff Measures (NTM)," said Johnny.

THE GOVERNMENT HAS BEEN RESPONSIVE

The FGD commended the efforts of the previous Government for its responsiveness in the dealing with this problem as evidenced by the adoption of policies to regulate the entry of certain goods into Indonesia such as the Minister of Trade Regulations concerning the provisions on the importation of certain products or goods. These regulations (Lartas) and other import control measures have involved various ministries or technical institutions such as the Ministry of Industry for manufactured products; Ministry of Agriculture for agricultural, livestock and plantation products; The Food and Drug Supervisory Agency (BPOM) for import regulation in the field of food/beverage and cosmetics.

The actual instruments or “Non-Tariff Measures” (NTM) used in the framework of import control are the Recommendation or Technical Consideration (Pertek) from the Ministry of Industry for the import of certain goods. In addition, imports must also be verified in the country of loading to ensure that the imported goods have fulfilled the applicable provisions in Indonesia.

MANY INDUSTRIES HAVE BEEN BENEFITTING FROM CONTROL MEASURES

Several types of manufactured products that have been regulated in the import policy include steel, tires, textiles and textile products (TPT), ceramics, electronic goods, footwear, flat glass, cosmetics and others. In general, the products whose imports are regulated are downstream products or finished goods or consumer goods. As is well known, this product category has almost been largely able to be produced by domestic industries, so import needs to be controlled.

In addition, other forms of NTM have also been applied. Safeguards and/or anti-dumping duties have been applied to the import of several types of products, including iron/steel, floor tiles, fiber/yarn and several others.

A case in point is the Indonesian textile industry. Moody's rating agency predicts that China's yarn, fabric and garment products will enter Indonesia in a greater volume. “The Indonesian textile companies that we rate are not immune to the dumping of Chinese textile products in Indonesia, should it occur,” says Stephanie Cheong, a Moody’s Analyst.

Since the US applies tariffs on textile products made in China of 25%, similar products from Indonesia are levied only 10-15%. Due to these tariff differences, Moody's sees an opportunity for Beijing producers to shift its textile products to Southeast Asia countries, including Indonesia. This in turn will create excess supply of textiles, and with abundant supply, prices will fall, which will create a blow to Indonesia’s own manufacturing sector.

The Indonesian Textile Association (API) has shown that 9 factories already closed down due to tougher competition from imported products in the period of 2018-2019. As a result, 2,000 workers were now out of jobs. These factories have lost their ground to the rush of imported textiles and textile products from overseas. The trade war between the United States and China has already affected the Indonesian textile industry.

There is a need to close loopholes that would allow general importers to import fabric raw materials. Previously, import permits were only granted to textile producers and even that was limited to raw materials such as filament yarn and fiber which in turn may not be traded.

If the Government wishes to attract Foreign Direct Investment (FDI) in the manufacturing sector it should be remembered that a non-competitive industry will never attract FDI in Indonesia let alone enable Indonesia to compete with Vietnam and Bangladesh which together hold more than 45% of the world market share in textile products.