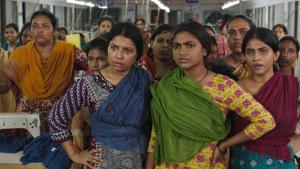 Made in Bangladesh by Rubaiyat Hossain 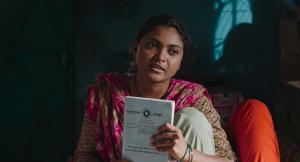 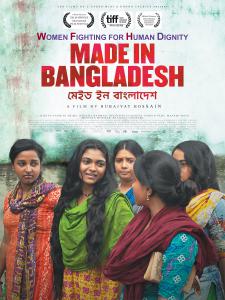 Poster Made in Bangladesh

NEW YORK CITY, NY, UNITED STATES, December 19, 2019 /EINPresswire.com/ — ArtMattan Films, the film distribution arm of ArtMattan Productions, has announced the acquisition of award winning film "Made In Bangladesh" by Rubaiyat Hossain, based on the life of Daliya Akter, a garment worker who escaped child marriage and went on to lead a trade union fighting for workers' rights in Bangladesh capital, Dhaka. The deal was signed between ArtMattan Films and Pyramide International.

Made In Bangladesh had its world premiere screening at TIFF 2019 and is currently playing in 62 theatres in France, seven theatres in Denmark, and one theatre in Lisbon, Portugal. It is currently screening in major festivals in the USA and will start it’s US theatrical run in March 2020, before getting a digital and home-video release.

The film depicts the struggles and successes of female ready-made garments (RMG) workers and explores how the garments industry of Bangladesh has helped to empower women and has provided them socio-economic independence.

"With Made in Bangladesh, Hossain has crafted an urgent cry for workers' rights, and a vision of feminist solidarity in the face of overwhelming opposition." ~ Cinema Scope

"As a look behind that T-shirt you just bought on sale for $9.99 at The Gap, and the human labor, sweat and suffering that went into it, this… definitely deserves wider attention.." ~ Hollywood Reporter

"Made in Bangladesh never sugar coats the near-insurmountable obstacles Shimu and her fellow workers face…[the] mix scenes of Shimu coming up against barriers with scenes of her achieving small successes ensures the film never feels hopeless." ~ Seventh Row

Made In Bangladesh is Rubaiyat Hossain’s third feature length film after Meherjaan (2011) and Under Construction (2015). The project was co-produced by Bangladesh, France, Denmark, and Portugal. It was financed by France’s CNC fund, Norway’s Sørfond Plus, the EU’s Eurimages fund, and Denmark’s Danish Film Institute fund.

Ms. Hossain went to Cannes Film Festival this year as the producer of Mahde Hasan’s Sand City. She had previously attended Locarno Open Doors three times and attended the Script Station at Berlinale.

FOR FURTHER INFORMATION AND SCREENERS, PLEASE CONTACT:
Diarah N’Daw-Spech, ArtMattan Films – Tel (212) 864-1760, e-mail: Info@africanfilm.com
ABOUT ARTMATTAN FILMS
ArtMattan Films celebrates in 2019 twenty seven years of exposing US audiences to a large variety of films about the human experience of people of color in many parts of the world. Films released by ArtMattan Films include Kirikou and the Sorceress, The Tracker, Gospel Hill, Scheherazade, Tell Me a Story, The Pirogue, Tango Negro: The African Roots of Tango, White Lies, The Man Who Mends Women and most recently The Citizen and Mama Africa: Miriam Makeba
More info at www.AfricanFilm.com

Made in Bangladesh trailer