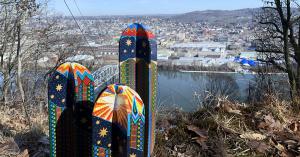 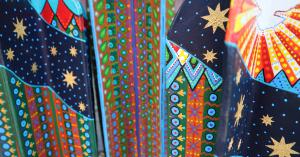 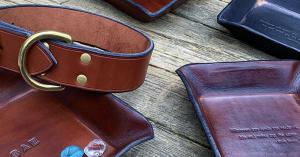 Leather workers create a unique sculpture to celebrate their 10th year in business and pay tribute to their region's Catholic Heritage.

"With other Catholic people have not only a shared history, but also shared metaphor." ”
— Greg Horgan

SAXONBURG, PA, USA, March 10, 2020 /EINPresswire.com/ — Rose Balis was born in Poland during the tumultuous decades that preceded the First World War. As a young girl, she was attached to a military regiment which took her as far as the pyramids in Egypt. In her late 20s, she moved to the rocky hillsides of the Allegheny Valley in the state of Pennsylvania. There, she married another Polish immigrant, a handsome coal miner with whom she would have four children, all born after her 40th birthday.

Eventually, her husband’s back was broken in a mine collapse, and as the Great Depression began, the family subsisted in extreme circumstances. Like many Slavic immigrants of her generation, she lived in an ethnic enclave largely communicating in her native language. Many mothers in her community lived to see their sons conscripted into war, just as their countrymen in their native lands had for centuries.

Their sons returned from the Second World War victorious having earned their citizenship to a country they grew up in as outsiders. Rose’s daughter married such a man, one of a handful of survivors of a torpedo attack who returned from war to staff a factory that would be a critical gear in The American Industrial Machine.

Rose’s great-granddaughter Nicole Horgan and her husband and creative partner Greg, noted artists who have shown in some of their nation’s most prominent decorate arts exhibitions, have created a masterful twelve-minute documentary to pay tribute to the sacrifices of people like Rose Balis.

Primarily, the husband and wife team are owners of the retail leather company, Four Robins Ltd. Since 2010 they’ve produced thousands of items of giftware, sophisticated leather valets and home accents using natural, vegetable-tanned leather which is hand-formed and results in a rigid, durable final form. Their handmade items are popular gifts both for personal occasions such as third anniversary. In addition, numerous multinationals including Toyota Motor Company have contracted Four Robins to create corporate gifts.

Their latest art project, which celebrates their 10th anniversary in business, is inspired by the Catholic history of Western Pennsylvania. In their documentary, the Horgan’s document the creation, over six months, a sculpture in leather, painted expertly by Nicole Horgan, a traditionally trained oil painter with three decades of experience. The sculpture, is named San Pedro for St. Peter, the apostle closest to Christ, and founder of the Church.

The joyful presentation of their documentary belies a more layered meaning. As, explained by Greg Horgan,
“We all have ancestors who had front row seats for history. People who witnessed the world change dramatically, just as we are witnesses now.
With other Catholic people have not only a shared history, but also shared metaphor.
It is the duty of our hearts to share happily with one another. Our art together is an expression of our love. For each other, and for the people who came before us.”

Created over six months using 48 square feet of leather, the piece is shaped like a cluster of San Pedro cacti, colorfully painted with mystical and religious imagery, much of it inspired by St. Peters Basilica, Ukrainian Easter Eggs and shamanic geometry. Around the base of the cacti are 1,500 keys, symbolic of the keys to Heaven that St. Peter is said to hold. The 12-minute video on the making of the piece can be viewed on the Four Robins website.