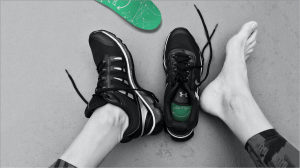 This partnership will advance the operationalization of real-world kinetic data and improve our injury prediction models while accelerating time-to-recovery for users”
— Quin Sandler, CEO

Under the collaboration, Plantiga’s in-sole sensors that detect and quantify changes to functional movement patterns will be integrated into Original Footwear designs.

“This partnership will advance the operationalization of real-world kinetic data and improve our injury prediction models while accelerating time-to-recovery for users” said Quin Sandler, Founder and CEO of Plantiga Technologies.

“Movement data is a valuable health biomarker for physical and neurological fitness. Changes to gait, stride length, acceleration and asymmetry can flag risk states and inform training and injury prevention strategies in the workplace. And the objective real-world movement data can be used to improve post-therapeutic safe-return-to-work assessments to reduce the risk of re-injury” added Quin.

Original Footwear, the long-standing footwear of choice for military and law enforcement, has recently broadened its collection to include lighter-weight consumer versions of its tactical boots.

“We are excited to work with Plantiga in building the next generation of tactical and occupational footwear. Original Footwear has a long history of technology-forward design and this partnership will add significant value for our customers by integrating cutting edge wearable healthcare technology to support the fitness of the men and women who depend on our footwear, day in and day out” said Kevin Cole, CEO Original Footwear

“Untreated abnormal movement patterns and improper load management significantly exacerbate the risk of injury and re-injury from falls and overexertion and can lead to chronic knee, hip and back pain and long-term reduced mobility” said Dr. Matt Jordan, Head of Applied Science at Plantiga Technologies. “Integrated wearables will enable ongoing screening to reduce incidence of occupational injury, improve recovery outcomes and support a safer approach for returning to work”.

The global wearable technology market is expected to exceed US$150B by 2025, with a range of sensors and predictive models enabling personalized, predictive and preventative healthcare.

Original Footwear is the leading manufacturer of occupational and tactical footwear for military, law enforcement and first responders. Founded in 1999, and based in Morrison. Tennessee, Original Footwear is the parent of Altama, Original S.W.A.T and Smith & Wesson Footwear brands, specializing in combat boots, uniform boots, tactical footwear and performance to support the men and women who rely on their footwear day in, day out.