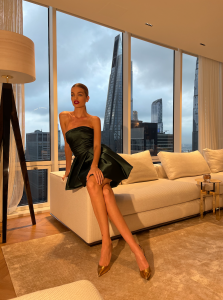 Danarys is inspired by my global identity. Each and every one of my pieces incorporates a touch of Victorian India with elements of classic New England elegance and New York edginess.”
— Founder and Designer Natasha Das

Danarys blends British Raj and modern metropolitan elegance and invites women to come together and own their uniqueness. Danarys encourages women to appreciate the true meaning of luxury, culture, classic elegance, and boldness.

“Danarys is inspired by my global identity. Each and every one of my pieces has its own unique story and incorporates a touch of Victorian India with elements of classic New England elegance and New York edginess,” said Founder and Designer Natasha Das. She continued, “Having learned to appreciate the importance of embracing my own unique strength, I designed Danarys to remind women to own their personal power, and that if women take on the world from a position of strength, they can make anything happen.”

About Natasha Das
Natasha Das, 33, is the founder of Danarys in Midtown Manhattan. She was born in New Delhi India and grew up in Sydney, Australia and New Canaan, CT. She currently resides on Fifth Avenue in Manhattan. Natasha received her Bachelor of Arts in Economics from Trinity College (CT) and her Master’s Degree in the Mathematics of Finance from Columbia University. After spending nearly half-a-decade on Wall Street in Fixed Income Sales & Trading at Societe Generale and Jefferies, Natasha decided to pursue her lifetime dream of starting her own high fashion clothing line. Natasha is a member of UNICEF’s Steering Committee and also serves on their Events Committee. She is widely traveled and speaks English, French and Hindi fluently. She is deeply engaged in cultural and philanthropic activities globally.